Introducing the Super Rare Druzy Agate Forest Tower Inclusion – a one-of-a-kind gemstone that is sure to take your breath away. This stunning piece features a natural druzy agate tower that is covered in sparkling crystals. The druzy agate is a unique type of agate that is formed when tiny crystals of quartz grow on the surface of the stone. The result is a glittering and sparkling effect that is truly mesmerizing.

The druzy agate tower is surrounded by a forest of inclusions. These are small mineral crystals that are trapped inside the agate. They give the stone a unique and intricate pattern that is truly mesmerizing. The inclusions are formed when mineral-rich fluids seep into the agate and deposit the crystals inside. This process can take millions of years, making this druzy agate tower inclusion a true natural wonder.

The Super Rare Druzy Agate Forest Tower Inclusion is the perfect addition to any crystal collection. It is a beautiful and unique piece that is sure to be admired by all who see it. This druzy agate tower inclusion is perfect for display in a home or office, and can also be used in crystal healing and meditation. It is also a perfect gift for anyone who loves crystals and natural beauty.

This druzy agate tower inclusion is a limited edition piece, making it even more special. Don’t miss out on the chance to own this one-of-a-kind gemstone – add the Super Rare Druzy Agate Forest Tower Inclusion to your collection today.

Watch the 4k resolution video below :

There are no reviews yet. 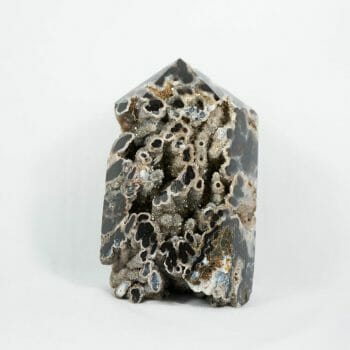